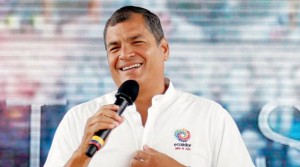 On Tuesday, the government of Rafael Correa made an unusual call to Ecuadorians: to avoid go shopping en masse to Colombia and better spend the dollars in the country.

With the falling price of oil, Ecuador faces in the last year an appreciation of more than 60% of the US currency, for an Ecuadorian it is much cheaper to cross the border and buy provisions in Colombia than doing it locally.

“Because of the dramatic depreciation of the Colombian peso against the dollar, many Ecuadorian cross the border and make purchases in towns of the neighboring country (…) under the premise that in Colombia the product prices are much less expensive,” the government admitted in a statement read by spokesman Stefano Iannuzzelli.

“We make a call to the conscience” of Ecuadorians “about the serious damage we are doing to our compatriots. The pride of being Ecuadorian should be evident, necessarily, on providing support to domestic production, stand shoulder to shoulder in complex and difficult times and prefer our production,” the official message adds.

The effect of the depreciation of the Colombian peso against the dollar has plunged the border area of Carchi into a crisis, where hundreds of shops have closed in recent months. For example, a 49 inch TV in Ecuador costs about USD 1200, in Colombia its price is USD 780.

Ecuarunari resorts to the UN while processes continue