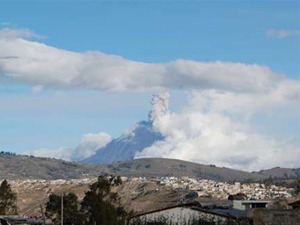 Jorge Bustillos, technician of the Geophysical Institute (IG, for its acronym in spanish), reported that the explosion and release of ash, registered yesterday in the Tungurahua volcano, has been a characteristic of the mountain during last week.

According to Bustillos, this activity is “vulcanian”, which means that the volcano has explosions and emissions every two hours,for two or three days, or even every week.

Bustillos said that this is due to the uncover of small or weak clogs that are formed in the cone-shaped tube, and prevent the material output, so the explosions expelled them out to the surface.

The IG technician explained that the level of activity of the volcano, which has been in eruptive process for fourteen years, is moderately with a downward trend.