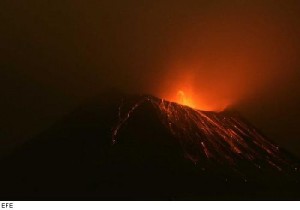 According to a National Polytechnic School Geophysical Institute report,  Tungurahua volcano reported the presence of Strombolian activity (constant output of incandescent material in block form) that ex-tended approximately 1 km above the volcano’s territory and moved 800 meters under the level of the crater.

Intense bellows were heard in the surrounding area and Ambato, vibrations in the windows of the volcano observatory (located in the Guadalupe area) were also caused, and there was a tremor in the town of Cusúa.

Ash falls were reported in Choglontús, Manzano, Bilbao, Palitahua and Cahuají populations, because the wind has been blowing toward the west.

No observations have been made by the presence of clouds in the area this morning but roaring can still be heard with moderate to high intensity.