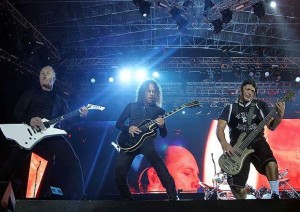 The ecuadorian fans could enjoy the Metallica concert at the Bicentennial Park, in Quito

The historic concert of Metallica in the city of Quito lasted about 2 hours and 10 minutes, in which the members of the band interacted with the audience, and there was a massive fireworks display.

Lars Ulrich handed out a pair of drumsticks to the fans, and Kirk Hammet and James Hetfield threw vellums to the Metal Box audience.

The public, through an open voting by text messages, could choose the `Fuel´ theme, from the playlisyt “By request”, to finish the concert with “Seek and Destroy”.

Bringing Metallica to Ecuador had an approximately cost of $ 4 million