U17 TRI classified for the World Cup 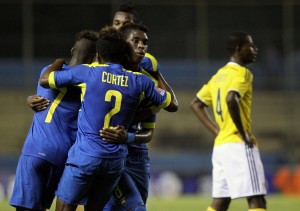 The Ecuadorian team, the U-17, clasified this Thursday to the World Cup in Chile after beating Colombia 2-1 in a tight game under the rain with goals of John Pereira at Min 40 and Washington Corozo at minute 54, two minutes after the goal of Colombian Edwin Cetre.

The tri got its pass to the World cup with this result and thanks to the defeat of Paraguay against Brazil, a team that will compete for its entry to the tournament against Uruguay, allowing it to classify third.

Ecuador will now have to play against Argentina on the last day of the hexagonal, in the city of Luque.

Horse Facheng stood out this Sunday at the racetrack