Unemployment Rate in Ecuador Has Decreased 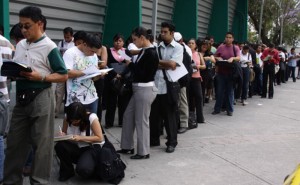 The Government reported this Friday that he unemployment rate in Ecuador fell to 7.4 percent in the third trimester of 2010. Last year, during the same period, it represented 9.1 percent.

According to INEC statistics institute, the rate is also lower than the one in the second trimester of this year (7.7 percent).

Unemployment levels have been declining steadily since the beginning of the year, but analysts say percentages do not reflect the working reality in the country.

In the analyzed quarter, there are approximately 335 280 unemployed Ecuadorians, while the economically active population represents 4.5 million people.

The underemployment rate stood at 49.6 percent in the third trimester, down from 51.7 percent marked in the July-September period of 2009.

The survey of unemployment is applied approximately in127 urban centers and in five cities of the country.