Unions prepare a march for November 19 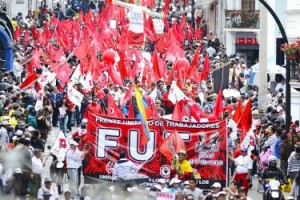 Social organizations, organizations of workers, indigenous people, students and teachers plan to perform a march in Quito on November 19 to protest against the “anti-labor” and “anti-people policies ” the current government applies, according to them.

The unions indicated that this new edition will be higher and more massive than the one that took place last September 17 in Quito.

Edgar Sarango, President of the FUT, said that the groups have decided to incorporate more approaches to a consensual platform convened at the convention held on August 16 in Cuenca. These issues would be the rejection of the rise in transport fares.

Tatamuez Mesías, President of the Ecuadorian Confederation of Unitarian Clasist Workers, said that unions defend the existence of a new labor code.

ALBA countries creates a protection and support plan against Ebola