Uruguay is still alive after victory against England 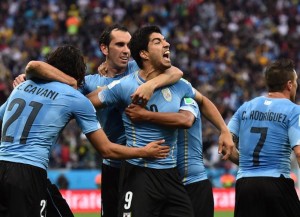 Uruguay defeated England by two goals of Luis Suarez, who played the game as a titular player, and continues in the race of the World Cup Brazil 2014.

The Uruguayan team took the lead with a Suarez head shot after a cross shot from Cavani (38min) and made the 1-0 in favor of Uruguay, with which concluded the first half.

In the supplement, the adverse score forced England to risk everything to avoid being eliminated. The goal of England came through Rooney, at minute 29, and established the 1-1.

few minutes left to end the match, Suarez scored the 2-1 with which ended the match in favor of Uruguayans at the Corithians Arena Staadium.

Chile left out of World Cup to the champion Spain