Venezuelan-government call on its supporters to eliminate “cliques” 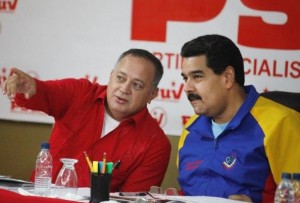 The President of the Venezuelan Assembly Diosdado Cabello and Foreign Minister Elías Jaua called on government party militants to be careful with those demoralizing messages from “cliques” who want to divide them.

These statements refer to strong criticisms that have been made ​​recently within them Chavism against the government management of Nicolas Maduro.

Cabello said that the “cliques” have hurt the Bolivarian Revolution and called upon to eliminate once and for all and to close ranks around the group of the late President Hugo Chavez and Maduro.

Prior days, Yoel Acosta Chirinos, retired commander, Chavez´s partner in the coup d’état attempt of 1992, have questioned the Maduro government and considered that he must give up before he takes the country into a terrible situation.