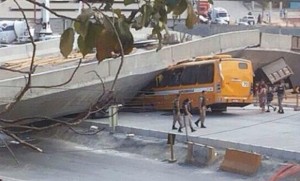 The fall of a viaduct over several vehicles today in Belo Horizonte, capital of the Brazilian state of Minas Gerais, has so far left two people dead and 19 injured, two of them seriously injured,  official sources reported to EFE.

The viaduct, which was under construction collapsed and fell on a bus, several work trucks and a vehicle that were circulating in Avenue I, in the neighborhood Sao Joao Batista.

Initially, authorities confirmed the death of two people and 19 injured, although they have not yet completed the full assessment of the zone.

According to the images broadcast on television, part of the structure fell on the front side of a bus that was passing by, but did not affect passengers.