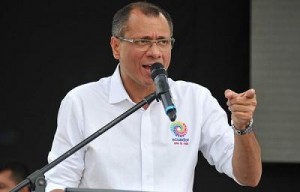 Vice President Jorge Glas Espinel rejected on January 10 the statements of Assemblyman Andrés Páez (CREO), according to who, bank transfers for $ 22.8 million would exist in favor of two people close to the official. “I will not let anyone put my name in the shadows,” he said during the weekly address.

In a letter sent to President Rafael Correa on  January 1, Paez indicated that he received anonymous documentation in which it becomes evident transfers for $ 17.4 million from the HBSC bank, of Hong Kong, to an account of the Masor Islands (a tax haven) and other deposits totaling $ 5.4 million in Panamanian banks HBSC, Basini and Austrobank.

In addition, the Assemblyman requested the General Comptroller Carlos Polit, to verify the existence of these banks, accounts and beneficiaries of the payments.

On his weely address of January 10, Glas presented a video in which he accuses the legistator of inventing information to hurt the government. He notes, for example, that the Masor Islands do not exist.