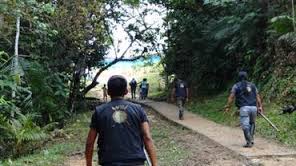 In State of emergency, say to be since last Friday the people of Sarayaku natives, after what they considered a “raid” of the army and police. The Community President, José Gualinga, and other leaders stated that on the night of last Friday two helicopters overflew this jurisdiction, for several times, a fact that had not occurred for several years.

Gualinga qualifies this fact as actions of intimidation by the national Government, for hosting on their territories to Cléver Jiménez and his advisers Fernando Villavicencio and Carlos Figueroa.

Instead, Aboriginal members of the Group of security internal Taysajaruta or Wio, stepped up security measures on the runway, the main square and the jungle of the Sarayaku territory. They do not carry firearms, but yes Spears, sticks and other implements of the Amazonian ethnic groups.

Gualinga, justified the decision to have Jimenez and his advisers in Sarayaku because the precautionary measures established by the Inter-American Commission on human rights (IACHR), protect him.

Meanwhile, Jimenez, says it’s a persecution from the State and that all started because is not subjected by the pressure from President Correa. He says that he will not ask for forgiveness.