Viteri: “We will reverse policy in what is needed” 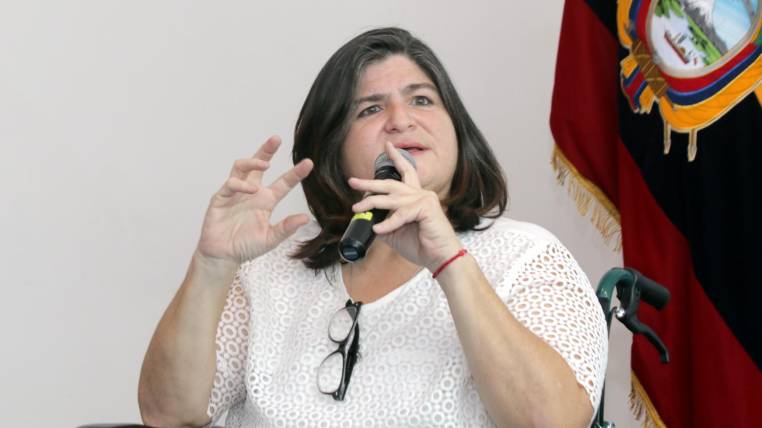 Without recipes. The new finance minister, Maria Elsa Viteri, yesterday underwent the examination of the press and answered all the questions, without haste, about her appointment, her economic alignment, her ministerial dossier and her future strategy. She did not clear the unknowns, but she did not evade answering. What she said is that she is not a woman “of recipes but analytical”, who acts according to the problem.

Without ignoring the progress of Rafael Correa’s regime, in which Viteri held the same position for a year and a half, she assured that she will review the efficiency in spending, that state companies will be reconstituted and that, if necessary, “progress will be made” back “in what is not giving results.

Among her plans is to not to continue to borrow or increase taxes to generate more income, but be more efficient in spending. But she did not rule out any option. Including the default, a remote possibility, according to Viteri, given the differences between the current debt situation and its previous management. But, if necessary, you will not “shake your hand” in making decisions.

But everything, she said, will be explained and detailed to the citizens so that they know what they are contributing to. “The hard part is not saying ‘no’. The difficult thing is the ‘yes’ and commit, “she emphasized.

The first measure in which it will put its stamp and define its economic strategy will be the announced new economic plan. The minister welcomed the business request to wait a few days before announcing it to be able to introduce changes. But she also asked time to those who have publicly expressed their

disagreement in the rescue of Viteri as Minister of Finance.

“I’m not surprised that there are people who are not happy, but the important thing is that the president is happy, because we have the same objective,” which is to generate welfare for citizens. To the others, she asked for time to act before being judged.

“It’s a very recessive moment and we need to reshape the potential of the country. We will have to do a good job with the demands of indebtedness and what they mean in the accounts. We have to objectively review the efficiency of our spending and change the strategy.

You have to bet and work hard on attracting investments rather than on indebtedness. And re-profiling that indebtedness. ” On a possible declaration of delay: “The situation of indebtedness in the past was one way and now it is another. Of course, Ecuador never failed. We comply with everything the market allows. The solutions are now totally different. Now, this minister does not shake her hand to face the problems and I will always defend the interests of the Ecuadorians. ”

Delay in the economic plan

“The Business Committee had made a proposal to delay the announcement of the economic plan and I agree with that proposal. It is important that we assume responsibility. I do not think it will be delayed beyond a week or 10 days. That is, the important thing is that in this month we have the proposal defined and, for that, we will work intensively. We have to distinguish the very short-term decisions that have to be made and sustain them with the medium and long-term ones, which are the ones that will give sustainability “.

“I have always said that the most convenient thing is that each person can take care of the cost of what they consume. The subsidies should not be given openly, but in a way that allows, in a period of time, short or long, to change the structural factors that cause this inability to assume their own costs. That is, take charge of the necessary change so that, later on, that subsidy is not needed “.

“The intention is not necessarily to go through tax increases, but to look for more appropriate measures. Without going to the easy, that each sector assumes its responsibility. We have to generate sufficient support for the productive sector. Not only the big business, but the medium, the small and the micro. All decisions will be argued. We will give an explanation so that citizens know what each one is contributing to “.

“If there was no confidence in the country, we would not have even had the opportunity to present ourselves to the markets. The fact that they ask for more or less demanding conditions does not indicate trust. This is marked by the country’s management. It would be necessary to review why there has been a worsening or an improvement of the conditions in the international markets. I remember that in the past it was said that Ecuador would never be able to return to international markets and I also remember that, in a record time, we were once again part of it. ”

“I have asked to be presented with the list of the complete team and I have recognized those officials who have contributed a lot and who have been the basis of institutionalization in the Ministry of Finance. I am evaluating what has been the concrete growth of that staff. You do not have to cut heads just because, you have to analyze. In the case of William Vásconez, he is in a process of resignation. ”

“I am also reviewing the proposals that the Business Committee made in previous dialogues. Next week I will ask you to come and talk with me to listen to the proposals you made in the past and the ones you have now. I have already talked with some of the guilds and I have mentioned, as always, working with open doors, as this Government has already done. This is a joint work. We have to get ahead all: all sectors and all levels. We all have the right to produce in the country and to be heard.” (I)