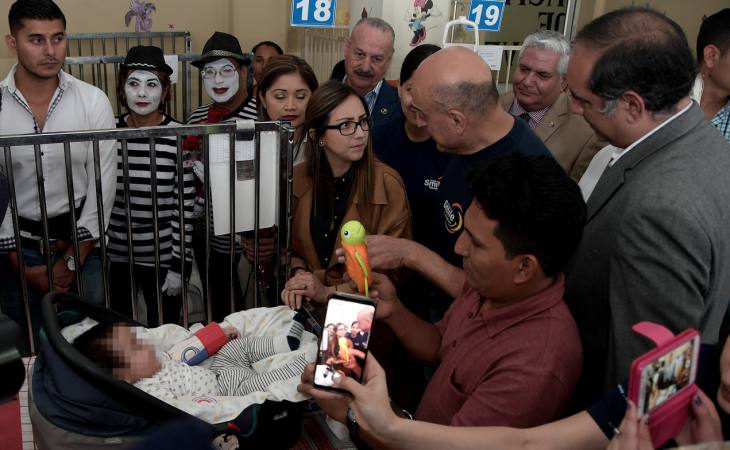 The referral of patients from the public system to use the services of the Leon Becerra Hospital, in order to seek liquidity, and the implementation of a dialogue table to evaluate the pending values claimed are part of the approaches that are considered to find a solution to the serious crisis of illiquidity that this center faces.

The hospital, than run by the Society for the Protection of Children, has financial problems that are linked to pending payments that should be canceled by the Ministry of Health. This item would amount to $ 7.2 million. The IESS owes them $ 1.8 million.

This has resulted in unpaid salary payments to 270 employees and up to one year to at least 100 suppliers, shortages of supplies and a decrease in the supply of services to the 20,000 patients who are attended each year.

These amounts claimed by the hospital were set by Congress in 2006. Each month, some $ 80,000 should be disbursed each year. Between 2014 and 2017 they have not been assigned, according to Ricardo Koenig, president of the Protective Society.

The Minister of Health, Verónica Espinosa, visited the hospital yesterday and assured that this “will not close” and for that legal mechanisms are sought to ensure their permanence, among them, the referral of patients and the review of the amounts claimed.

Espinosa was to participate in the inauguration of an intensive care unit for adults in that hospital. There, the minister gave recognition to Usama Hamdan, president of the Global Smile Foundation, who has sent care missions.

“We have a relationship mechanism (referral of patients) that will allow cash flow to the hospital and we will comply with all administrative legal analysis and we will resolve it we are accompanying in a complicated situation, the ministry will not let such a valuable institution to close, “he said.

Koenig reiterated the seriousness of the situation and indicated that no more than two weeks await the completion of the dialogue tables for the verification of the debt. With this, they could cancel three months of outstanding salaries to workers.

And it is not the only hospital that has debts receivable from state entities. The Charity Board, which runs hospitals such as Luis Vernaza, must charge $ 112 million and Solca has receivables of $ 137 million, according to executives who were in a forum at a university.

Hospital executives of the Board of Charity, Solca and Leon Becerra, yesterday afternoon, revealed the figures owed to them by state entities, during a forum at the Espíritu Santo University.

“The general health system that depends on the Ministry of Health (MSP) is collapsed,” said Mayor Jaime Nebot, who was in that forum and reiterated the difficult situation.

In yesterday’s meeting, Sixto Cuesta, from the Board of Directors of Solca, said that they are owed $ 120 million for assistance to patients derived from the MSP (there are amounts drawn since 2009) and the IESS. In addition, the State owes them $ 17 million per budget allocation.

Óscar Orrantia, of the Charity Board, ratified “serious problems” in four hospitals for state debts of $ 112 million. “Apparently things are going to improve, but we cannot continue like this,” he said. (I)

Fall of debt bonds and rise in country risk, after change in Finance