Votes count process was concluded by the CNE 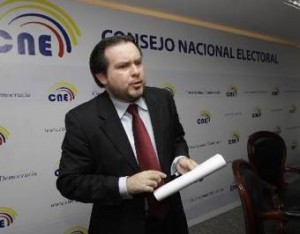 On Saturday night was finished the scrutiny of the elections held on February 23, in the 24 provinces of the country by the National Electoral Council (CNE).

The process was concluded within the 10 days of extension CNE granted to the provinces that were delayed. Manabi, Guayas and Pichincha completed that process with inconsistencies.

Paul Salazar, Vice President of the electoral body in Guayas, noted that they have completed the scrutiny nationwide.

“The Provincial Board has resolved all the records processing from the national Polling Stations. In addition, all the resources that have presented us the political parties and movements were resolved.”

Despite this, the results are still pending in the 13 parishes where new elections will be held, on March 23. Thus, it is estimated that 100% of results will be obtained after the accounting of those votes.

Chiriboga will go to the U.S. to check on pending extraditions