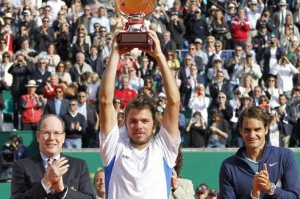 Stanislas Wawrinka, No. 3 of the world was proclaimed champion for the first time in his career at the Monte Carlo Tennis Masters 1000 this Sunday´s final, after beating Roger Federer, with partial 4-6, 7-6 (7/5), 6-2.

It is the first Masters 1000 tournament Wawrinka wins in his career, having lost two finals in this category, in 2008 in Rome against Novak Djokovic and last year in Madrid against Spanish Rafael Nadal.

Wawrinka goes well reinforced on the road to the next big event of the season, Roland Garros, because Montecarlo is the first major clay tournament on his preparation for Paris.

Federer, fourth in the ATP rankings, suffered his fourth defeat in a Monte Carlo final, after the setbacks suffered in 2006, 2007 and 2008, in these three cases against Nadal.