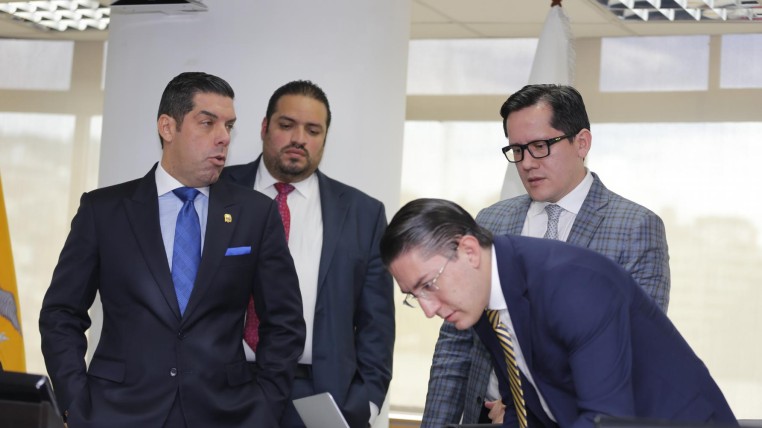 Disappointed. The first to leave were the employers. At noon yesterday there was no white smoke at the meeting of the National Labor and Salaries Council (CNTS) to set the Unified Basic Salaries (SBU) for 2018. Workers and businessmen did not reach an agreement, so the Labor Minister, Raul Ledesma, determined that the increase will be $ 11. That is, the salary for 2018 will be $ 386.

With regard to the tariffs for the 21 productive sector tables, an increase of 2.4% was decided. In total, 591,372 workers in the country receive the Basic Salary and will benefit from this increase. For public employees who earn it, the salary increase will cost the Treasury $ 8 million in 2018, said Finance Minister Carlos de la Torre. The employers had proposed that the salary increase be $ 3, based on inflation of less than 1% expected at the end of this year.

His main argument was that a greater increase in inflation can affect the competitiveness of companies and hinder the hiring of more staff next year. Given the concern of employers, Ledesma said that compensation mechanisms will be implemented so that companies do not lose their competitiveness. One of the measures analyzed will be to increase the percentage of the return of the advance payment of Income Tax (IR) in 2018, announced the director of the Internal Revenue Service (SRI), Leonardo Orlando.

For the next year it was determined that the IR advance refund will be 50%, but due to the “effort” of the companies for the wage increase above inflation, said Orlando, it will be analyzed that the refund is 100%.

The amount above the inflation in which the salary was raised will also be taken into account: $ 7, to fix the amount of repayment of the advance, Minister Ledesma said.

The three government authorities who were at the press conference yesterday to make the announcement said that raising the salary will also help boost the economy, which is in the recovery phase and is on track to grow steadily.

On the other hand, the workers proposed a higher figure, but accepted the $ 11 raised by the Government.

Oswaldo Chica, president of the Central Unitaria de Trabajadores (CUT), said that his proposal was for the SBU to increase $ 25.

Their main argument is that they want to narrow the gap between the salary ($ 375 for this year) and the basic family basket ($ 706.31 in November).

After the announcement of the increase, the Chamber of Commerce of Guayaquil, through a press release, said that the Basic Salary “should be fixed in a technical rather than a political way”.

The union argued that in other countries, such as Brazil and Costa Rica, the increase in the minimum wage is calculated technically, taking into account certain macroeconomic conditions.

“Ecuador has one of the highest minimum wages in the region. Neighboring countries like Colombia and Peru have lower minimum wages, which boost their labor markets allowing them to be more competitive and more attractive to investors, “said the entrepreneurs.

But the increase not only impacts the workers who perceive it. With its increase, an increase in municipal fines, traffic, court costs, etc. is generated.

This remuneration is applied as a basis for calculating, for example, fines in judicial matters, in areas such as criminal, corporate, etc. Another effect of the wage increase is recorded in traffic offenses and offenses, as well as in municipal fines for non-compliance with ordinances for the use of public space, commercial activities, and so on. In the case of companies, this parameter is also used.

They may be subject to fines for non-compliance, for example, with the Market Power Control Law. If they commit abuses they can receive sanctions ranging from 50 basic salaries, which equals $ 17,000. The Labor Minister also announced that a new conformation of the CNTS that would include representatives of the Workers Unity Front (FUT) is being analyzed. Currently, as a union representing employees, this entity is made up of members of the CUT. To know Pension According to the law, the lowest alimony is equivalent to a Basic Unified Salary (SBU). That is, the minimum that must be paid for this concept in 2018 will be $ 386. Divorce The diligence for the dissolution of the conjugal partnership is equivalent to 40% of the Unified Basic Salary. That is, for next year the user must pay $ 154.4. Penalty fee The fine for speeding is 30% of a Basic Unified Salary.

This means that for the next year, if a person commits this infraction, he must pay a total of $ 115.8. Voices Carlos de la Torre, Minister of Economy and Finance Although the increase in salary boosts the economy, there is also a competitive effect that must be compensated in some way. In that sense other actions are established. Leonardo Orlando, director of the Internal Revenue Service The increase of the Unified Basic Salary not only has the effect of maintaining purchasing power, but also increasing it.

To compensate we have announced some measures. Rodrigo Gómez de la torre, representative of employers The economy is not reactivated by the salary; We need to generate employment and 6 out of every 10 Ecuadorians do not have full employment. With the measures there are sectors that will be in trouble. (I)