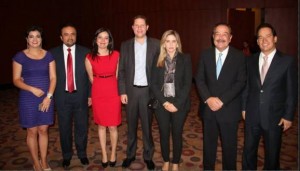 “Women for Unity” is the name of this initiative, whose first public appointment will take place today at the Convention Center of Guayaquil at 16:00, and which does not seek a referendum or to create an alliance to confront the upcoming presidential elections of 2017.

“We are here to contribute to what the mayors and the prefect have been doing, because this is a joint work,” said Tabacchi, who indicated that they seek the support of different sectors and that the aim of this call is intended to put “an end to the continuous attacks” women who do not share the same ideology of the ruling party have received.

“The tolerance level of the country has reached its peak, and women have been the most attacked by this government. The Saturday´s weekly addresses became Saturday´s weekly `insultdresses.´ It should be clarified that when a woman is assaulted all women are,” Tabacchi said, while Chacon stated that this is a fight for democracy and the defense of women.

Tourism in the Galapagos Islands increased by 6% in 2014