Writers join the protest of the disappeared in Mexico 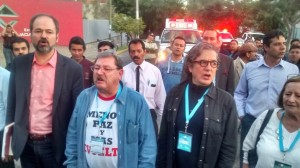 Writers that participate in the Guadalajara International Book Fair (FIL for its Spanish acronym) in Mexico, the largest literary encounter in Spanish, led on Monday December 1 a march to demand President Enrique Peña Nieto the location of 43 missing students.

“Alive they took them away, alive we want them!” shouted the Iberoamerican Award José Donoso (Chile, 2012) next to the crowd, gathered in front of the FIL enclosure, walled by metal fences and dozens of riot police.

For his part, the writer Francisco Taibo shouted with all his might: “We are joining to the requirement that during the last 60 days has crossed the country, from cape to cape, from corner to corner.”