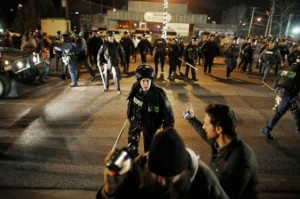 US President Barack Obama wants that more policemen are equipped with cameras on their uniforms and ordered to reviewthe supply of military weapons surpluses to the agents, reported on December 1 the White House after the meeting of the President with his cabinet to study the Ferguson case.

Obama wants to spend $ 75 million over three years to equip the police uniforms with 50,000 cameras.

The jury’s decision of not opening a criminal proceeding against the white policeman who killed an unarmed African American youth sparked new unrest last week in Ferguson.