Yesterday seven new judges of the CNJ were inaugurated 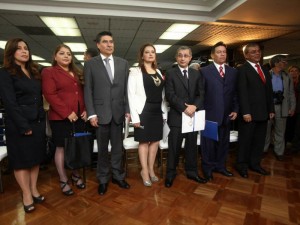 Yesterday, the Judiciary Council officially appointed the seven new judges of the High Court. The President of the Judiciary, Gustavo Jalkh, during his speech criticized those who “cast doubt” on the” transparent” process of renewal of the National Court.

In addition, Jalkh in his speech asked the seven judges to be “wisdom,” to impart “justice” and “seek the truth.”

Jalkh also stressed the importance of not “chasing anyone, but protecting social rights and citizens.” “It is an act of responsibility,” he said.

Today is scheduled the election of the President. On this, in the auditorium of the CNJ the new judges spoke about the possibility of re-electing Carlos Ramirez, current head of the entity.