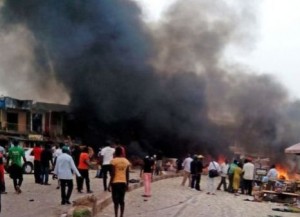 At least 13 dead and 20 injured, according to a Reuter’s correspondent, remained as balance due to an explosion recorded in the city of Damaturu, in the northern state of Yobe.

In this place, several fans were concentrated in locals to watch the Tuesday´s game of the World Cup Brazil-Mexico. The Islamist sect Boko Haram has pointed to these locals as objectives of its violent insurgency.

The victims are in the Hospital General Sani Abacha and some have told to BBC that a suicide bomber gestated the attack while other witnesses have stated to Reuters that a man threw an explosive device at the local and then fled.

Given the danger of future attacks, the Nigerian government warned the public to abstain from attending mass meetings to watch football matches.