15 notary offices are suspended for not complying with tax obligations 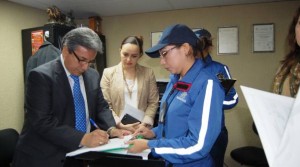 Fifteen Ecuadorian notaries were suspended yesterday for seven days and are being investigated by the Council of the Judiciary (CJ) after the Internal Revenue Service (SRI for its Spanish acronym) determined they violated their tax obligations.

Of the fifteen suspended notaries, five are from Guayaquil, four from Portoviejo, two from Quito, two from Ambato, one from Loja and one from Machala. The decision came after a joint operation made by CJ and SRI officials.

Rodolfo Espinel, suspended server from Portoviejo, said he will demonstrate that his notary’s office gave bills. He also said that the action of SRI is positive; therefore he ruled out there are political intentions.

The Judiciary pointed out that the sanctions will not affect the service of public notaries, since the work will be in charge of other notaries during the seven days suspension.