4 coaches of the Voice Ecuador are confirmed 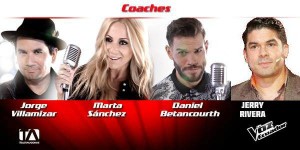 Since last week Teleamazonas, the channel that will broadcast the reality show was revealing one by one the coaches. According to Maria del Carmen Arellano, production manager of Teleamazonas, three foreign singers were elected in order to follow the guidelines of the franchise.

The program, that will begin the casting stage from July 11th, will air in October and will last an average of three months.

“The winner will have a contract with Universal Music to record a single, with a view to a disc. At the moment, a cash prize is being analyzed,” said Arellano.

“La Toquilla” rocks out the the popular song “Palomita errante”