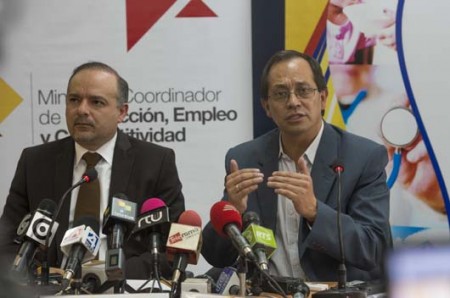 Coordinating Minister of Production Richard Espinosa (left) and David Acurio from the Ministry of Health, explained the measures that will be implemented.

During a conversatory, the Minister of Production, Employment and Competitiveness, Richard Espinosa, said the price of 5,626 medicaments marketed in Ecuador will be regulated from next September, after verifying that there are drugs that have uneven costs in the local market.

For example, Espinosa explained that along with the Ministry of Health, they have detected that diabetes drugs that cost 30 cents at a random pharmacy, cost up to $ 1.30 in another one.

He also assured that there are pharmaceutical companies that through the usage of advertising, are covering a high percentage of the industry and set prices that have not been regulated, thus affecting the pocket of citizens.

Because of this diagnosis, in the country there is a new regulation on fixation of prices of medicinal products for human consumption, to help regulate medicines in the National Medicaments Chart, and those for catastrophic and rare diseases. There are also 4,827 items that will not be covered such as shampoo, sunscreen, etc.. This represents 46% of the products that are in Ecuador.

David Acurio, Vice Minister of Governance and Health Surveillance, of the Ministry of Health, reported that in order to fix prices, a base price will be established after analyzing the market. High costs will be reviewed and adjusted to lower values​​.