60% of Ecuadorians approve the management of Correa, according Cedatos 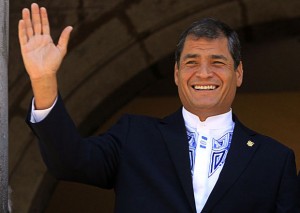 60% of Ecuadorians approve the management of President Rafael Correa, said a survey released yesterday by the President of Cedatos, Polibio Cordova.

According to the survey, 32% of Ecuadorians disapprove the management and 8% did not respond, said Cordova, who noted that the survey was conducted on a sample of 2168 consultations in fifteen Ecuadorian cities, with a confidence level of 95%.

Cordova said in a press conference that the Correa case would be “unprecedented” in Ecuador, since he has maintained high levels of popularity since 2007 when he became President with an approval of 73%.

“It is an unprecedented case because the Presidents of the Republic have started with a fairly high rate of around 68% and in two or three years, it has dropped to less than 30% and in some cases have ended up with a30% or 32%,” Cordova said.