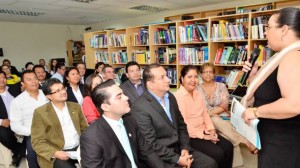 Four universities with administrative careers submitted to the Council of Higher Education (CES for its Spanish acronym) the drafts of the redesigns of their curricula, according to the Ecuadorian Academic Network of Wide Field Administration Careers (Raeca).

These are the Metropolitan University, with the careers of Administration and Commerce; University Laica Eloy Alfaro of Manabi, with that of Marketing; the University of the Santa Elena Peninsula, with administration; and the UniversidadTecnológica Empresarial of Guayaquil, with Trade.

Josefina Espinoza, adviser of the CES in Guayas, said that once the information enters the system, a specialist assesses whether it meets the parameters specified in the Academic Regulations. This may take six months.

SENAE announced a total of $ 28 million apprehensions for smuggling