71 municipalities will assume the traffic competition in September 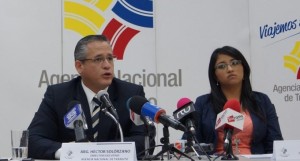 Hector Solórzano, head of the National Transit Agency (ANT for its Spanish acronym), announced that this month 71 municipalities will assume the transit competition. Furthermore, on October 82 municipalties will complete the process.

“The Government would be doing things wrong if in September all the competences are transferred and if it intrudes on that obligation, which is the responsibility of the municipalities”, Solorzano said.

The authority of the ANT said that according to the Traffic Law, it is competence of the municipality to regulate the rates of ground transportation services, according to the technical analysis of actual operating costs, in accordance with the policies established by the Ministry of industry .

Meanwhile, the Mayor of Guayaquil, Jaime Nebot, refuses to set the bus fares. The Mayor suggests the government to establish a common tariff policy and in this way ‘200 fares’ are not set in the country.