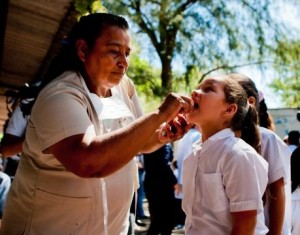 Four people from the Mahates population in the department of Bolivar, north of Bogota, were infected by the chikungunya virus as confirmed by the Colombian Ministry of Health.

Deputy Health Minister, Fernando Ruiz Gomez, who attends the emergency, estimates that “in a negative scenario” in the next four months about 670,000 cases could be recorded.

The ministry plans to take measures to prevent the disease from spreading, however, there are already warnings of outbreaks in nearby towns and it is awaiting the analysis of 200 people in the same population, who have symptoms of the disease.

Nicholas Cantillo, Mahates Mayor, said that the confirmation of the outbreak has created panic in the population, therefore, he requested aid to the national authorities due to the poor conditions of hospitals in this population.

In response, the government of Juan Manuel Santos announced it will allocate about $ 3.2 million to strengthen health systems for Caribbean municipalities that may be affected by a possible virus epidemic.