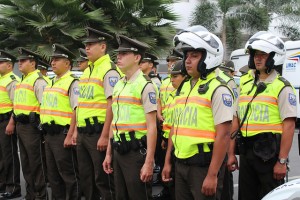 Interior Minister José Serrano announced on Tuesday the dismissal of 97 police officers, for being linked to organized crime gangs.

Furthermore, he mentioned that five other officers are under investigation for allegedly stealing money to a drug plane that crashed in Pedernales (Manabi) in May 2012.