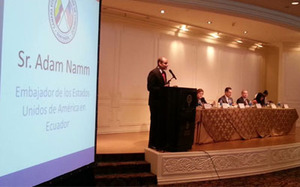 The U.S. ambassador in Ecuador emphasized the importance of trade relations, education and development, during a talk held last Tuesday in the Ecuadorian American Chamber of Commerce of Guayaquil (AmCham).

Namm recalled that his country is the main partner of Ecuador, and quoted several policies that have caused controversy.

“Hosting leaders of marginalized countries like Iran and Belarus; granting asylum to Julian Assange, a $ 40 million trial and sentence against the newspaper El Universo, the boycott of the President (Rafael) Correa at the Summit of the Americas in 2012, are just some of the problems that attracted international attention last year, and like it or not they affect the way the world sees Ecuador,” said the ambassador in a speech of 39 minutes.

Namm remarked, “the Government of the United States respects the sovereignty of Ecuador and its elected government.”

Regarding the talk of Namm, the regime leader, Rafael Correa, said he has not heard what the ambassador said, but argued that it would be another comment “of the ambassador Namm (…) I think he is pretty new to this stuff,” said.

Emelec seeks the crown on resumption of championship