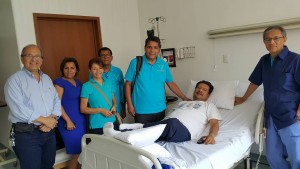 The Seventh-day Adventist Church will conduct until Friday August 28 medical brigades in the municipal medical center Santa Ana, in Samborondón.

This activity is carried out in conjunction with the Municipality of Samborondón, by a group of six missionary doctors of the Loma Linda Hospital in California (United States) and the Montemorelos Hospital (Mexico). Doctors are specialists in physical and respiratory therapies, dentistry, nutrition, pediatrics, psychology and motivation.

The campaign began on Monday August 24, during the first two days about 30 people were assisted in the town center.

During the brigades, free training on health, family relationships, vegetarian cooking, nutrition, exercise, family and spiritual growth are also given.

This health care plan is part of an agreement that was reached with the municipality, which also contemplates the building of a family support center in La Puntilla, which will be directed by foreign professionals.

Report shows the status of the beneficiaries of the BDH