ALBA countries creates a protection and support plan against Ebola 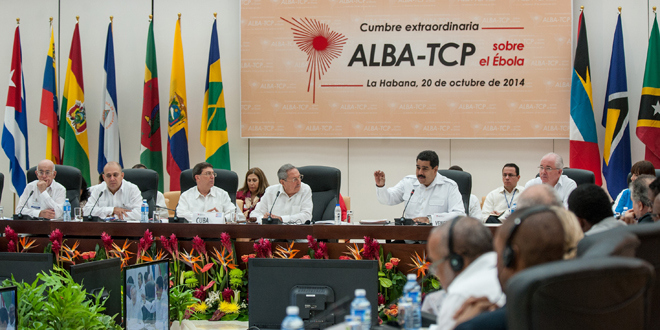 The UN considered “extraordinary” the leadership decision of Cuba over Ebola at the Summit of the Bolivarian Alliance for the Americas (ALBA for its Spanish acronym), which on October 20 resolved it in two ways: prevention within the borders and action outside them.

The region activated the Epidemiological Surveillance Network, a newly released diplomatic victory, which coordinates activities and share technical information; It will homologate the protocols of national security and border surveillance. It will also create a committee, an elite group of specialists able to train doctors and nurses to confront the Ebola in their respective countries.

The ALBA ensures that its member countries, of the Caribbean and Latin America, are willing to “contribute with highly qualified health personnel to join to the efforts” of the more than 400 volunteer Cuban doctors sent to African critical points.