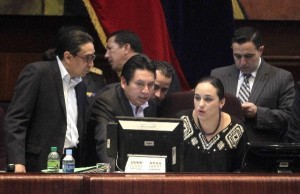 The Alianza País block met at the Carondelet Palace to reestablish their agenda for the remainder of 2014 and early 2015.

Of the 24 projects that were expected to be performed this year, nine have been approved. Five are in the first debate, five are set for second debate, three are set to begin the process and two more are pending.

One of the coordinators of Alianza País in the Parliament, Fausto Cayambe, said: “We have reestablished the topic of temporality, but these are extremely important laws, thus, the society will count on secondary rules according to constitutional principles.”

In the remaining two months of the year and next January, PAIS aims to process 11 laws like the reform of the Labour Code, the laws of Telecommunications, of Mobility, of Land, of Land order and Use of lands and the codes of health and Environment, among others.