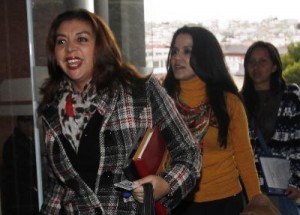 Alianza PAIS continues discussing new reforms to the National Constitution. There are eight topics, in which the block did not get a total consensus, according to Gabriela Rivadeneira, President of the Legislature. It is expected that from Wednesday the internal debate is resumed.

One of these cases is the reform of Article 103, which states that the President can not completely veto citizen initiatives. The argument to change it is that,  among his functions, the President has to colegislate and such a distinction should not exist. The reform was not yet approved by the majority of the group.

The same happens with the other topics. In the justice system the proposals are two: To change the conformation of the National Court of Justice, and that the Council of the Judiciary determines the number of judges and tribunals in each territorial division.

The lawmaker Mariangel Muñoz said this is not about the lack of agreements. She said it is a matter of time and these points were relegated to be analyzed more deeply.

Chevron Case will be submitted at the Human Rights Council