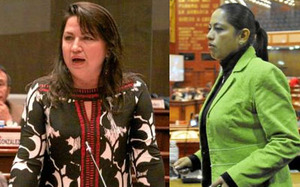 The Ethics Committee of Alianza Pais suspended for a month, for minor faults, the Assembly members who were in favor of the decriminalization of abortion for rape: Gina Godoy and Paola Pabon.

During the time that Pabon and Godoy are suspended, their alternates Rene Caza and Eduardo Sanchez will replace them. According to close sources, neither of them may give statements to the press during this period.

According to other sources, Soledad Buendia will also receive the same sanction.

On Monday morning, the executive secretary of AP, Galo Mora, a member of the Commission and Assembly member Galo Borja, along with the president of the Assembly, Gabriela Rivadeneira, and Vice President, Rossana Alvarado, gathered at the headquarters of AP. When they met Pabon and Buendia, they said they will abide according to the decision.

Rivadeneira maintained that it is not a sanction on the political-ideological diverse thinking in AP, but it is for the lack of organization and discipline, and they will not be expelled from AP.