On Friday, September 10th 2010, a Solemn Ceremony took place in the Isabela Conference Room at one of the most important Hotels of the city, the Hilton Colón Hotel to celebrate 74 years of existence of the Guayaquil Chamber Of Industries. 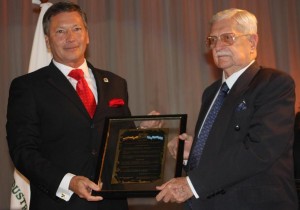 In the picture, Gustavo Negrete Ugalde (right), General Manager of Industrial Molinera received the Award for the affiliation of 65 years of the company representing Ab. Alvaro Noboa, CEO of the company.

Important personalities and authorities of Guayas province attended the event, such as the Mayor of the City Jaime Nebot Saadi, the Ministry of Industries and Productivity Verónica Sión, the Vice-Prefect of the province Luzmila Nicolaide, among others. The event started by showing a video of the honored companies that had previously been awarded before the Ceremony, after being affiliated to the Chamber of Industries for 25, 30, 35, and 45 years, as well as testimonials of the Best Workers of each company.

Later that night, Awards were given to the companies with 50, 65, 100 and more than 100 years affiliated to the Chamber of Industries. Many companies were recognized such as Industria Cartonera Ecuatoriana, Industrial Molinera, Unilever Andina, Banco Pichincha, Dulcería La Palma, La Universal, Laboratorios H.G., Cervecería Nacional, among others.

A special recognition was given to Junta de Beneficiencia de Guayaquil for their philanthropist work since 1888.

In addition, businessman Nicolás Febres-Cordero Ribadeneyra was given the Luis Noboa Naranjo Award for the Best Industrial 2010 for his long career as an entrepreneur, his successful job as CEO of ECUASAL with concerns for the welfare of the Ecuadorian society by being the pioneers of iodized salt before it was demanded by the government, and their interest in the environment.

New Model for the Ecotouristic Development of Galapagos Islands