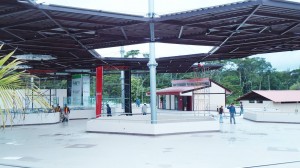 The Amazon Ikiam Regional University, located in Tena, (Napo), opened yesterday. 271 million dollars is the government investment for the University.

The Human Resources Minister Guillaume Long and the Vice President of the Republic, Jorge Glas, declared officially inaugurated the work in the presence of students and residents of the zone.

Long explained that they “have fulfilled” with the country to open the doors of the last of the four new universities created by the government. Furthermore, he clarified that the technological careers will start in March and April, with the approval of the Higher Education Board.

On a campus of 93,000 meters, covering the Colossus Biological Reserve, the center will operate, which by 2015 will have more facilities as dorms, restaurants, library and gym, Long said.