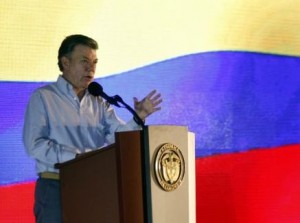 The President of Colombia, Juan Manuel Santos, introduced the bill that includes the elimination of presidential reelection.

“Let’s eliminate the figure of reelection. The election will be eliminated, not just the re-election of the President of the Republic, but that of all senior government officials,” said the president.

Santos added that he personally and politically believes that reelection “is inconvenient and therefore must be eliminated.”

The initiative should come to study and discussion in Congress and represents the gateway to restore the balance of power in the country, Santos said.

In addition, the president said that the most convenient is leaving the presidency in four years faced with the possibility that the Congress will consider extending the period to five or six years.