American countries come together to confront the Ebola 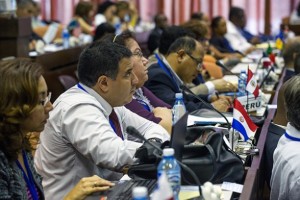 Health authorities of 34 American countries, yesterday, October 30, approved “lines of action” against Ebola, when closing a two-day workshop in Cuba.

Delegates from all American countries recommended “establishing the epidemiological surveillance” to monitor people “coming from the areas of transmission” of the virus, according to a document read by the Cuban Deputy Health Minister Marcia Cobas Ruiz.

“We are able to deal with this disease,” proclaimed in his closing speech the Minister of Health of Bolivia, Juan Carlos Calvimontes, who thanked Cuba’s initiative to convene this continental conference, which was even attended by the US, something unprecedented in half a century.