200 million people are at risk of falling into poverty, according to UNDP 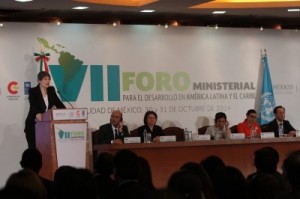 The Seventh Ministerial Forum on Development in Latin America and the Caribbean, seeks to analyze various approaches to overcome social inequality by means of social inclusion, tax equity and effective institutions.

The Administrator of the United Nations Development Programme (UNDP), Helen Clark, during the inauguration of the VII Ministerial Forum on Development in Latin America and the Caribbean, held in Mexico City (Mexico), said that between 2002 and 2012 Latin American countries managed to reduce poverty levels, yet 200 million people are at risk of vulnerability.

The forum, in which ministers and representatives from 32 countries participate, the UNDP official said that Latin America was able to reduce the proportion of people with incomes below four dollars a day from 42% to 25% in this period, while the middle class rose from 21% to 34%.

However, despite these advances, currently about 200 million people (37% of the population) are classified as vulnerable, “ie, at risk of falling into poverty”.

“Poverty is multidimensional and should not be measured only by income levels, but health status, access to education, employment, social participation, health and safety”, Clark said.

The theme of the forum is “multidimensional progress and inclusive development”, and according to Clark, this is a space to exchange successful experiences of various countries that can be incorporated into the post-2015 development agenda of the United Nations.