Angelina Jolie and Brad Pitt are getting married privately in France 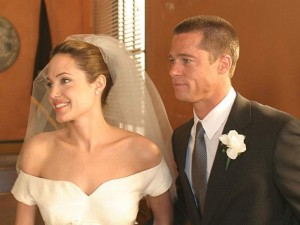 The actors Angelina Jolie and Brad Pitt were married in France last Saturday in a chapel at Miraval Chanteau, a spokesman for the couple said. The intimate ceremony was attended by family and friends. A California judge who presided over the ceremony in France, spread them the marriage certificate.

Children of the couple attended the ceremony. Jolie made her way down the aisle accompanied by her eldest sons Maddox and Pax. Zahara and Vivienne threw petals. Shiloh and Knox behaved rings, spokesman also confirmed that the celebration lasted all day and all played.

The Hollywood star couple arrived by private plane from Nice, where he was on vacation, and contracted marriage, then it moved to the island of Gozo to film his new movie By the be.