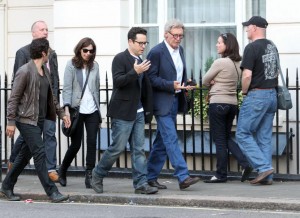 J. J. Abrams resumed production of ‘Star Wars: Episode VII’ in the UK after he was suspended for several weeks, said ‘Variety’.

The filming had to stop about two months because Harrison Ford broke his leg with one of the doors of the Millennium Falcon during filming in May.

In early July, Disney decided to suspend filming of “Episode VII” from “Star Wars” for the actor to recover from the operation he had to undergo.