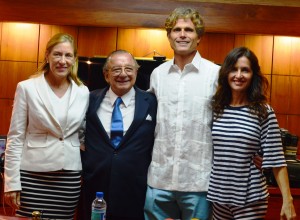 Philanthropist Alvaro Noboa and his wife, Dr. Anabella Azín, announced at a press conference their future cooperatation with the Best Buddies Foundation, whose ultimate goal is the inclusion of people with intellectual disabilities in the corporate world. Anthony Shriver Kennedy, lerader of the Best Buddies Organization, visited Ecuador as part of his international crusade for people with mental disabilities and chose the Crusade for a New Humanity Foundation to work in conjunction, organizing workshops for people with special abilities, and prepare them so they can conduct operational tasks.

Noboa stressed that the convocation to register for the workshops will be through the media, adding that once completed the trainings, he will proceed to provide employment for these people in his companies, as he has been doing. “I want to give you this great news, the Noboa Group is willing to employ these  prepared people in our companies here in Ecuador and around the world.”

For his part, Anthony Shriver Kennedy said he was excited to share with the Ecuadorian foundation and be part of this social project. “Thank God we have friends like Alvaro and Anabella who have helped us and committed to the work done by the Best Buddies Foundation. (…) I think that everyone can build, especially those with intellectual disabilities and that is the spirit that is within everyone. I have seen in 50 countries, in general I have seen in Mexico that our representative Carlos Slim supports the employment program for persons with disabilities, and here in Ecuador, Annabella and Alvaro will do the same. Thanks to your support, there will be thousands of employment opportunities for people with disabilities,” he stated.

Biess will lower interest rates to 6% without down payment

Full house would air on Netflix