AP has an agreement for five more amendments 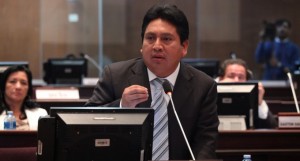 The block of Alianza PAIS (AP) has agreed to change over five more sections of the Constitution. Nationality, cuts, political control, intellectual property and social rehabilitation are the topics that will be addressed in the second package of amendments to be processed in 2015.

Fausto Cayambe (AP) indicated that in addition to those items, an adjustment to clearly define the hierarchy of rules between laws and ordinances has being discussed.

Section 7 refers to the nationality of children of migrants, the Section 186 to the organization of the courts in the provinces, 203 to the social rehabilitation system, 322 to the intellectual property, the prohibition of all forms of appropriation of collective knowledge (including ancestral knowledge) and ownership of genetic resources.

On political control, Cayambe indicated that the audit would be extended to the institutions and entities as secretaries, coordinating ministers, public companies, Ecuadorian Institute of Social Security (IESS).

There are different views on whether this second package of amendments would be processed by the same Casual Commission. Its president, Juan Carlos Cassinelli, said that “some argue that a commission should be established for each group and others that it should be the same.”