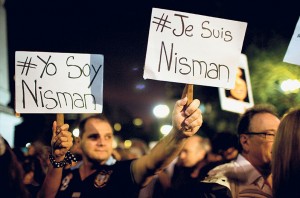 Hundreds of Argentines gathered yesterday at the Plaza de Mayo to express their displeasure with the death of Prosecutor Arberto Nisman, who was found dead at his home the morning of the day he would submit before court documentation on the Argentine government and its alleged cover-up to Iran in the cause of an anti-Semitic attack in 1994.

Citizens asked to investigate and clarify the death of Prosecutor and if it would be a suicide or “incitement to suicide.”

Opposition groups convoked successfully thousands of people in cities all over the country, especially in Plaza de Mayo, with the slogan “I am Nisman,” asking for justice.