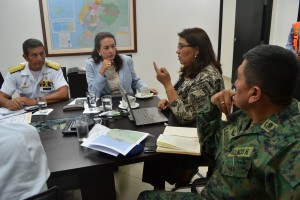 The Armed Forces met with the National Secretariat for Risk Management, the Municipality of Guayaquil, the Guayas Prefecture and the Oceanographic Institute of the Navy to coordinate actions before the announced presence of El Niño Phenomenon.

During the meeting, the most critical areas, the urban and rural settlements in the basin of the Gulf of Guayaquil likely to be affected and the resources to meet possible emergencies were determined.

On July 15, a drill will be held in Canton Salitre, in which the Armed Forces will support with human and technical resources.