Ash cloud was ejected by the Tungurahua volcano 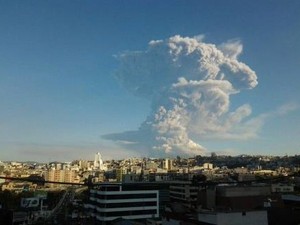 A column of smoke that exceeded ten miles o altitude , was expelled yesterday at 17:45 by the Tungurahua volcano. The incident occurred after a loud explosion according to reports of the Geophysical Institute of the National Polytechnic School.

Communes of Chacauco, Chambiato, Cusúa, Bilbao, and Pillate Cotaló performed the respective evacuation around the volcano and the high risk areas of Tungurahua and Chimborazo were declared in orange alert.

For the large amount of volcanic material and pyroclastic flows that reached the ravine of Achupashal and reached the Chambo River, the vehicular traffic was closed on the Ambato-Baños road, as reported by the National Secretariat for Risk Management.

Since early Thursday when the volcano resumed its activity, the volcano shows a moderate level with an upward trend after remaining inactive for the previous two months, according to the Geophysical Institute.

Doctors awaiting decision on their resignations