Government keeps defending its position on the COIP 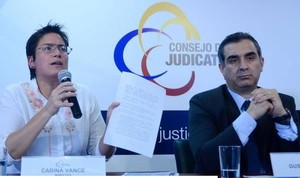 Through press conferences, on Saturday, trough television commercials, the Government has defended the content of the Integral Criminal Code(COIP) before the medical associations’ rejection of Article 146 regarding the  penalties for malpractice.

Government representatives  as President Rafael Correa, the Health Minister Carina Vance and the President of the Council of the Judiciary, Gustavo Jalkh, have defended the articles arguing that the law offers more guarantees for their professional practice.

While for the medical sector, what is not clear, according to the president of the Ecuadorian Medical Federation, Alberto Narváez, is who would be responsible in these cases, and under what parameters would be determined that an action was unnecessary, dangerous and illegitimate.

The common complaint of doctors in major public hospitals in Guayas, Pichincha, Manabi , Azuay and Tungurahua, is the lack of guarantees to provide optimum service to patients, which bare the shortcomings of this public service.