Assembly approves the Monetary and Financial Code with 91 votes 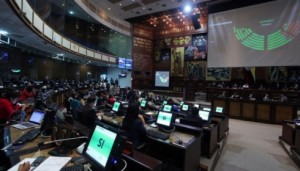 This Thursday, July, 24 the National Assembly approved the new Monetary and Financial Code, with 91 votes in favor, 2 against and 3 abstentions.

The Secretary of the Assembly Libia Rivas, reported that the text of the legal body was sent to legislators through emails and seats.

113 assembly members were present for the vote. In the final text of the Code, the legal status of the Board does not appear, which prevents the demands according to the opposition.

Assemblyman Oswaldo Larriva reported about the changes made in the Monetary Code.